“Hedda Archbold and I have worked together for over a decade, during which period I have found her to be an invaluable ally. Offering unwavering support, excellent advice and incomparable organisational skills, her passion for doing the job properly is unmatched, and her ability to get it done extraordinary. Frankly, I’d trust her with my life.”

William Ayot is a poet, author, coach, teacher and ritualist. He works with individuals and groups to explore leadership through poetry, performance and ritual. He is currently Poet-in-Residence at Saïd Business School, Oxford University and sits on the board of Literature Wales. William is a Member of the Welsh Academi, a Fellow of the Guild of Mythodrama Practitioners, and a Fellow of the Royal Society of Arts & Manufactures. He lives with his wife, Juliet Grayson Ayot, in a restored Monmouthshire Gentry House near Chepstow, South East Wales.

Simon Brew is a maverick writer and editor. He is the founder and editor of Film Stories, a monthly print magazine, a weekly podcast, a YouTube channel and a series of live events. Previously he conceived, launched and edited denofgeek.com. Simon writes and edits trade and consumer titles such as Minecraft World magazine, in the areas of film, gaming, mental health, IT and TV – and Kevin Costner. He hosts Q&As, panels and live events and his company handles full editorial production of magazines and websites.

“I’ve worked with Hedda for many years and I am proud to call her my agent. She’s clever, committed, informed, inspired and inspiring, always on hand with sound professional advice. Her knowledge of film and media is superb – and she’s great company to boot.”

Author Naomi Clifford was interviewed about her book The Disappearance of Maria Glenn for the October 2016 issue of Your Family History magazine. You can read the piece by visiting Naomi’s website. 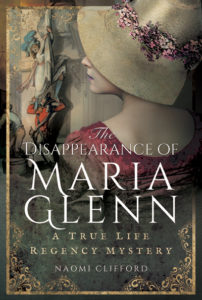 HLA Agency is pleased and proud that Naomi Clifford’s excellent non-fiction read The Disappearance of Maria Glenn has been published by Pen & Sword. The first reviews are in:

Naomi Clifford brings this story of abduction and the aftermath in Regency Somerset brilliantly to life. Her style is as readable as her research is thorough. It is a fascinating look at the life of ordinary people transformed by a single event with devastating consequences. Read it!